Introducing Paul Lovy and Jody Chesley, our New Hampshire 2020 Bigs of the Year.

These two amazing role models were nominated by their Littles and Littles' family members, and were selected through anonymous voting by BBBSNH supporters, staff, Bigs and parents/guardians of Littles in our program. 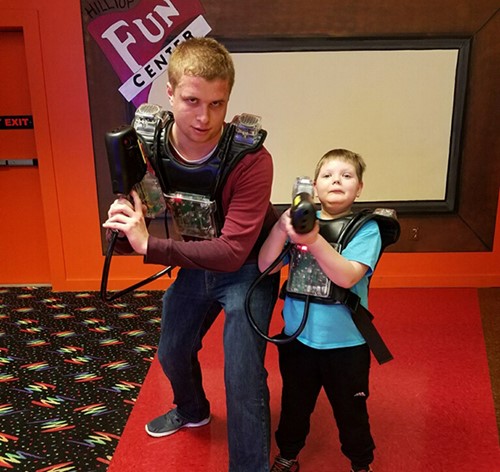 Paul met his Little Brother Liam three years ago, and over the years has become one of the most important people in his life.

From the start of their match, Paul has encouraged and supported Liam's interests. When Paul learned that Liam was the only kid in his neighborhood that didn't have a bicycle, he made sure to get Liam one with the help of a friend who worked at a local Toys-R-Us. Paul took Liam to a local park where he helped him learn to ride a bike, and riding bikes is now one of their favorite activities to do together.

Shortly after the start of their match, Liam discovered a love of theater. Paul describes Liam as a natural born performer and when Liam was cast in several theater productions, Paul made sure to attend each performance as one of Liam's number one fans. When Liam became interested in learning more about Vikings, Paul took him to the library so they could read up and learn more about Vikings, and then they spent several visits making Viking armor and weapons out of tin foil and other recycled materials to stage a Viking battle at a local park.

Liam lives with his grandmother, who nominated Paul for this award. She wrote: "When I signed up Liam for the program I was not sure what to expect. I had hoped he would find a Big Brother to spend time with him. I gained custody of Liam when his father walked away. Liam needed a positive role model in his life and he needed someone in his life that would spend a consistent amount of time with him. Paul is everything and more I could ask for in a mentor to Liam.

"Ever since Paul and Liam were matched close to 3 years ago, Paul has spent nearly every Saturday with him when his schedule allows. Consistency is really important with Liam and he really needed that in his life. He learned that he could rely on Paul. Paul is a part of our family and he has moved into our hearts. Paul and Liam enjoy a wide variety of activities together from playing the base guitar during jam sessions to running simple errands like going to the dump or getting an oil change.

"Paul has taught Liam what it means to be responsible and show him how to carry himself. He has showed him the value of hard work and showed him what it means to be someone who goes to work each day. When I was not able to make it to pick up Liam from his Summer Camp, Paul did not hesitate to volunteer and took the day off from work. Paul told me he considered it a "gift" to be able to pick Liam up from camp and hear all about Liam's accolades. Liam has been involved in various theatrical performances over the years and Paul has made sure to attend them all. He has even come to my theatrical performances as well to show his support. I have begun to notice Paul incorporating some of our family sayings and expressions into his own language. If someone suggests plans for a Saturday, Liam will not accept them as he knows that is his special day with Paul.

"Paul has showed Liam many things including how to be a man, something that I could never have done. Paul is a very special gift in our lives. 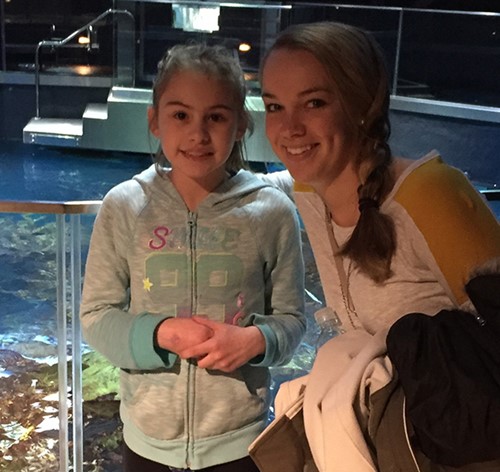 After being a Big Sister in college in North Dakota, Big Sister Jody decided to become a Big again when she returned to New Hampshire to start a career, seven years ago. She was matched with Little Sister Tianna, and it was the start of a life-long friendship.

The match overcame a rocky start to build a solid bond and lasting friendship. After gaining Tianna's trust, Jody helped Tianna through some academic and social challenges at school and showed unwavering support for her. Their Match Support Specialist reports that Tianna has come a long way with Jody's guidance.

And Tianna has been a part of Jody's life through some big milestones of her own, as Jody welcomed her first child last year. Jody has also remained in close touch with her past Little Sister, and Tianna even met her once when she came to visit Jody.

In her nomination, Tianna wrote: "Jody is the best big sister ever. She has impacted my life in so many ways. When I was failing math, she tutored me. When I was going through something, she always helped me get through it. She has taken me to gymnastics meets, taken me to her lake house, we had movie nights. And many more things. She shared life changing things with me before anyone else knew. I love her so very much. She is sweet, kind, funny, talented, smart, and a great role model. This is why she should win this nomination award because she really deserves it."