I had learned about Cam and Adam’s match on a BBBSNH Instagram post. When I saw that Cam played guitar, I reached out to his match support specialist, and offered them both tickets to the BBBSNH Benefit Concert at The Stone Church, in Newmarket where my band was playing. Adam, Cam’s Big reached out to me and we had a great conversation. They were excited to come to the show. I had a call with Adam and Cam, and I asked him a bit about his guitar playing, and since he’d never played in a band setting before, I invited him to the band sound check before the show and asked him to bring his guitar.  We had a quick conversation about songs that he knows. We had one in common, so I invited him to play with the band during the sound check.  Turns out, he can sing it as well!

After a great set, the band called Cam up on stage for our finale to play and sing “Should I Stay or Should I Go” by The Clash. Cam killed it and the crowd of over 100 erupted in cheers and clapping. What a great night. It was so much fun for Cam, but just as much for the members of The YellowHouse Blues Band to have him perform with us. Michael White and I are both members of the band as well as members of the BBBSNH Board of Directors and we couldn’t have been happier. The best part of the night was after Cam sang and the cheering had stopped, Cam thanked the crowd for being there and shared he “Really believes in the program”. That was quite the gift to hear from Cam.

After the show, Monty Curtis, lead guitar player of The YellowHouse Blues Band told Cam that he wanted to give him an amp so he had something better to practice with; Cam was thrilled. A few days later, I reached out to Marty England, Executive Director of Continuum Arts Collective, (a non-profit in Maine who supply musical instruments and art supplies to kids in need), and talked with him about Cam. Marty was excited to hear about Cam’s performance and asked if Cam needed a guitar. Between myself, Adam, input from Cam and Marty, CAC purchased Cam a butterscotch Fender Telecaster, the exact model that Cam had been looking for. About a week or two later, both Cam and Adam came over to my house and I was able to give him the guitar and the amp. We had a great time and ended up playing music for about three hours. 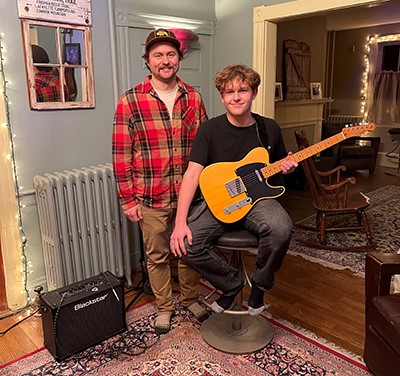 On Christmas Eve, Adam Sniegowski, guitarist, producer and Effects Designer of Browne Amplification, wrote on his Instagram page, “Today I am giving away our new pedal, “The Carbon” that was on my board.  Over the years, there has been so many people that have blessed me with gear that I could have never afforded at the time. It was always such an encouragement during the tumultuous times that come with being a musician, and gave me that little emotional boost I needed to keep trying. If there is someone that you think could really use a fun new piece of gear and can’t afford it, leave a comment saying why you think they could use a little extra Christmas magic this year.”  I messaged Adam and told him Cam’s story and on Christmas morning, I found out he picked Cam! That made my Christmas. I couldn’t believe I and I couldn’t wait to tell Adam and Cam. Adam (Cam’s Big) told me that Cam couldn’t believe it either and said, “how is all of this happening?” Moments like these are what keep me involved with BBBSNH. The work that BBBSNH does really changes lives, for the better.

I want to say a special thank you to BBBSNH for matching Adam and Cam, to Marty England at Continuum Arts Collective for donating the guitar, to Monty Curtis for donating the amp, for Adam Sniegowski at Browne Amplification for choosing Cam for the Carbon effects pedal, to my bandmates in The YellowHouse Blues Band for being so gracious to Cam, and to Adam and Cam, for being such a great match. Cam, keep it up, you’ll be a rock star before you know it!  You all made this a very special Christmas for me.

BBBS Board Member since 2008