Thank you for helping us reach our Thankful Giving Campaign fundraising goal today. During such a difficult year, the outpouring of support we've received has been breathtaking. Earlier today, we emailed our supporters with the start of a story about a very special match. Below, we're including the story in full.

From the bottom of all our hearts here at BBBSNH, thank you. We wish you well this season of thanks and beyond.

Ben and Andy: An Immediate Connection

Ben is quiet, kind-hearted, outdoorsy and respectful. He loves animals - especially dogs, fishing and hiking, and doing woodworking projects. If he could do anything with his time, Ben says he would eat chocolate cookies all day.

He is also one of hundreds of Littles who benefit from the time and support of a volunteer mentor through Big Brothers Big Sisters of New Hampshire's one-to-one mentoring program.

When Ben started middle school, his mom, Janice, noticed he was struggling to make friends and worried about his self-esteem. By enrolling him in BBBSNH's after-school, site-based program she hoped he'd meet someone with whom he could connect.

At the start of the 2019-2020 school year, Ben got that and more. He was among the first kids matched in a new partnership with the Dover Police Department, called Bigs with Badges.

When Ben met his Big Brother Andy, an officer on the Dover PD, they realized they had so much in common - including that their birthdays were just two days apart! They immediately made a plan to share a chocolate cake with peanut butter frosting when their birthdays rolled around. 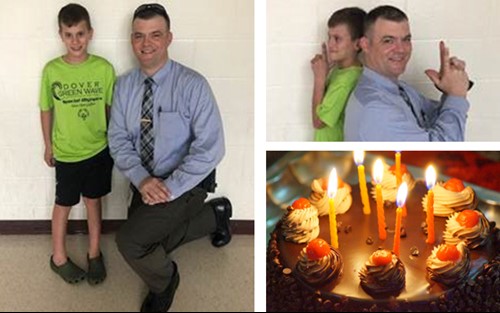 Little did they know, the COVID pandemic would disrupt that plan and many others, but their connection has flourished, nonetheless.

Through last winter, Ben and Andy met after school once a week, chatting about fishing, hiking and Boy Scouts, and taking short nature walks around the school.

In March, they walked across the street to the Fire Department to tour the station and meet some firefighters. Ben was really enjoying his time with Andy at the site-based program, but everything was about to change. 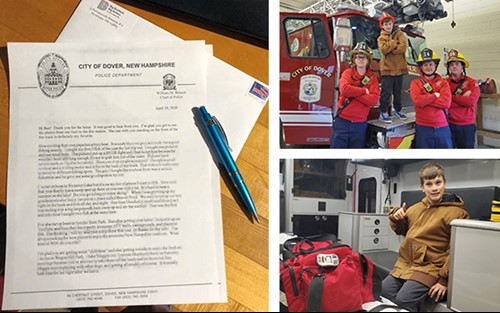 Days later, Ben's school closed due to the COVID-19 pandemic and Ben and Andy, like matches across the state, were forced to meet virtually or find other ways to stay in touch at a distance.

Ben and Andy didn't miss a beat - letters replaced their weekly in-person meetings, and they grew closer than ever.

For their commitment to the program, Andy and four other Dover Police officers who are BBBSNH mentors were honored with the department's Chief Daniel Smith Award for Exceptional Service. This award is given is employees who have gone above what is normally expected while serving the citizens of the community.

When Ben and Andy's birthday month rolled around, Andy knew that they wouldn't be able to share that chocolate cake with peanut butter frosting, but he had something even better in store.

Andy arranged a special birthday parade for Ben that brought the entire community together including Ben's teachers, the Dover fire department and the Dover Police. Ben was delighted when a parade of vehicles rolled past his house for a COVID-style birthday celebration. 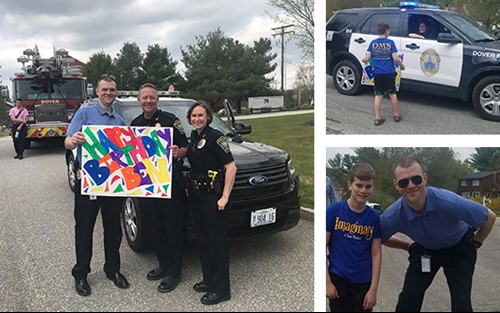 A few months later, when it became clear that the 2020-2021 school year would look different and they wouldn't be able to continue meeting as a site-based match, Andy and Ben decided to roll over into the community-based program. In fact, all five Bigs in Badges matches with the Dover Police did the same thing.

Now, they remain in touch virtually, but are also able to schedule in-person meetings in the community following BBBSNH's social distancing guidelines.

Ben and Andy's mentoring relationship has given them each a friend for life. Studies also show that youth with mentors are more likely to reach their full potential - gaining greater self-confidence, higher academic aspirations, and are more likely to avoid risk behaviors.

Your donation is putting more mentors like Andy in the lives of Granite State youth.

Thank you for giving the gift of mentoring!